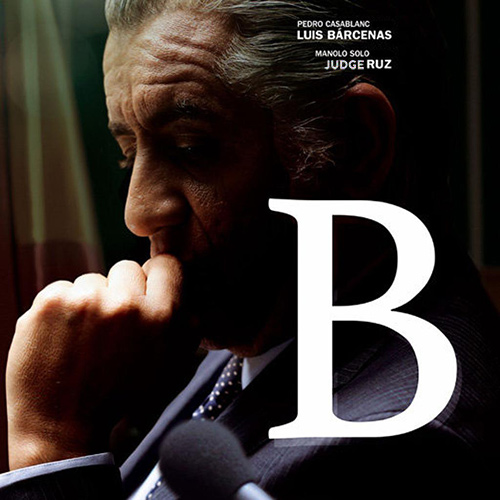 Does the truth change anything?

Corruption scandals have entangled Spanish politicians and top businessmen. Join CinemaAttic for the Scotland premiere of Goya 2016 nominated movie B, la película followed by a series of talks and a DJ set to keep discussions flowing till midnight.

On 15th July 2013, the old PP party treasurer and former senator, Luis Barcenas, was transferred from the prison to court in order to testify. Up until then, he had denied any connection with the so-called Barcenas Paper’s, which proved the existence of a slush fund inside the conservative Spanish party Partido Popular (PP). However, after 18 days in prison, Barcenas decided to change his statement. The secret of his B books he claims could change everything.

An adaptation from the theatre play “Ruz-Bárcenas”, by JORDI CASANOVAS, B, la Película is presented as a legal drama which re-enacts the actual court proceedings of the Barcenas case and explores the democratic health of a country rattled by a succession of corruption scandals.

Transparency International has alerted the lack of transparency of Spanish political parties funding and put them in the spotlight as the institution most affected by the effects of corruption. By screening B, la película, CinemaAttic aims to bring the topic to the attention of the Scottish audience and debate about the power of cinema as a social tool.

Join us on the 8th April at Old St Paul’s Hall from 7pm.

This is a special event organised by CinemaAttic that you can’t miss, so tell you ma, bring your fellas, spread the cinema love.

The movie will be shown with subtitles in English